To recollect and revive ship repair 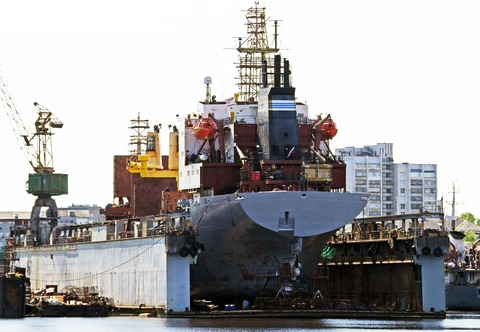 The capacity of ship repair facilities in Russia does not meet the fleet requirements. The revival of this segment is possible if the state undertakes certain support measures.

Albeit inevitable for any ship owner and shipping company, ship repair as a separate activity is nearly always associated with shipbuilding. Quite logically, ship repair and modernization is commonly conducted at shipbuilding facilities and occasionally at some ship repair yards miraculously spared from the soviet period. Hence the un
coordinated and contradictory statistics on such works. One of industrial portals offers an up-to-date list of domestic companies with a ship repair category including 60 sites throughout the country, which is not that much for large sea nation. For example, the Netherlands numbers about 100 companies specializing in ship repair, 700 suppliers of dedicated equipment and materials. This information is available from one of the articles by Anatoly Chepchugov, Director of Shiprepair Complex – Primorsky Plant LLC.

The market players acknowledge that those scarce ship repair yards are mostly worn out and obsolete. They need investments in modernization and development.

While trying to solve the problems of domestic shipbuilding during the recent years through encouraging the demand for commercial fleet by state support measures, the authorities still leave ship repair on the roadside. Thus, ship repair facilities continue deteriorating and ship owners prefer having their fleet repaired in other countries. “In our region, there are few reliable ship repair yards able to ensure fast and high quality repair. Therefore, the ships leave the country, — comments Aleksandr Oleynikov, BoD Chairman, Azov Shipyard JSC. — We are quite competitive as compared with foreign companies. Perhaps, we are inferior in respect of terms and quality as they have a more advanced equipment and higher concentration of production. Quite naturally, our performance is lower for that reason. Yet, our margin is considerably less: we have to set competitive priceы for our services. Today, our margin of 5% affects our ability to acquire new equipment and invest in fixed assets. That is an enormous chronic problem that can only be resolved with the state assistance.”

A similar situation is in the Far East region. An essential part of Russia’s fishing and commercial fleet leaves for repair in S. Korea and China. These countries offer fast repair with good quality, prompt supply of components and spare parts at comparable prices. In the result, economic state of Russia’s Far East enterprises is worsening from year to year, just like that of many plants in the country.

“National ship repair companies are mostly unable to offer competitive terms, quality and costs”, says Denis Samsikov, BoD member, Volga Shipping Company. According to him, absence of permanent load, disruption of cooperation schemes and financial problems of the plants have lead to their technological inferiority, lack of highly qualified personnel and depreciation of fixed assets. “The only way to attract ship owners is to offer competitive prices, terms and quality of works”, believes Denis Samsikov.

By the state will

Those challenges can be met but they are mostly associated with regulations and, consequently, depend on the government. The market players interviewed by IAA PortNews almost unanimously agree that positive changes are possible through addressing of some key aspects: adjustment of customs regulations, setting of zero VAT for ship repair works, development of financial mechanisms for modernization of production facilities.

According to Aleksandr Oleynikov, the ban on repair of foreign-flagged ships is absolutely irrational. “Turkey has opened its ship repair yards for ships flying under any flag: welcome for repair. Why do we prohibit foreign ships from entering ship repair yards? We should clear them, pay deposits. There are some absolutely crazy rules that just hinder our operations. Foolishly, we have lost an enormous market”, resents Aleksandr Oleynikov.

It is a known fact that the share of imported components is very high in both the operating fleet and in ships under construction. Therefore, the time of repair depends on the time required for delivery of components and spare parts. “When repair is conducted at domestic yards we face a problem of spare parts delivery, — tells Sergey Kiselyov, representative of Northern Alliance LLC (the company operates a fleet of tugboats in the North-Western Basin). — It can take two or up to four weeks from the moment a spare part leaves a warehouse in Europe till its arrival to a shipyard in Russia. That delays the repair and a ship waiting for spare parts is taken out of a dock with a repeated docking operation undertaken upon arrival of spare parts. That entails additional expenses and loss of profit. A foreign yard with faster delivery of spare parts and stricter deadlines is much more attractive.”

Kanonesky Ship Repair Yard CJSC (KSRY) confirms that the company considerably depends on supplies of spare parts and equipment from abroad. That is because the bulk of ship equipment is either of foreign origin or out of production due to its obsoleteness and, consequently, subject to replacement with a modern one. There are problems with the time of manufacture and delivery, sanctions, obtaining of approvals from classification societies, etc. However, the company succeeds in prompt response to those challenges. “Imperfect tax and customs legislation regarding repair and maintenance of foreign ships results in lower competitiveness of the industry companies as compared with similar companies of neighboring countries and, consequently, in lower number of orders due to the customer churn, — says KSRY. — Related articles of the Tax Code and the Customs Laws should be amended in the part of services on repair and supply of equipment and spare parts for vessels.”

According to Sergey Kiselyov, customs clearance of spare parts should be simplified. It is necessary to develop and introduce the programme for their clearance. “For example: ships on the international ship register enjoy customs privileges with zero-level rate of duty and VAT, — tells Sergey Kiselyov. — However, ship owners having their vessels repaired at a Russian yard have to pay a customs duty in full and a VAT for imported spare part. That essentially increases the cost of repair. Each component imported into Russia becomes 30% more expensive and we still cannot reach out to the customs service with that.”

VAT is the most sensitive issue in the industry. The cost of services rendered by any ship repair yard includes the prime cost, the level of profitability (economic policy of the company) and the value added tax (additional 20%). Only small companies offering minor repair of ships in ports have VAT privileges. In 2019, the Ministry of Industry and Trade of the Russian Federation put forward an initiative to reassess the situation ant to set a zero VAT for all types of ship repair. According to the Ministry, this measure alone will boost ship repair industry output by 40% within a couple of years with overall production and the number of orders to double within a six-year period. The Ministry of Industry and Trade has drafted a bill on introduction of amendments into the Tax Code. The document submitted to ad hoc ministries for approval was rejected by the Ministry of Finance. According to the Kommersant newspaper, the Ministry reasons its position by the following concerns: there will be a shortfall in revenues with no compensation and a precedent will be set for other taxpayers.

Nevertheless, the Ministry of Industry and Trade is not going to renounce its initiative, Boris Kabakov, Director of the Ministry’s Shipbuilding and Marine Facilities Department, said in March 2020 when speaking at the meeting of the Council of the Federation Committee on Economic Policy. “We believe that this issue should be raised again since the current situation puts our companies in uncompetitive conditions as compared with those of foreign ship repair yards”, he said.

Obviously, the state engaged in development of national shipbuilding and encouraging the shipping business award orders to domestic shipyards will sooner or later have to address the recurring problems of ship repair in Russia. In October 2019, RF Government approved the Strategy for the development of the country’s shipbuilding industry till 2035 that foresees the construction of 651 units under an optimistic scenario, 463 units under the change-the-business (basic) scenario or 357 units under the business-as-usual scenario. The share of commercial fleet is to be multiplied anyway.

Any ship, including newly built ones, needs a regular maintenance and repair. The dedicated facilities require modernization and development, no less than the fleet itself. Without state support, it will not be possible to revive the market that currently yields little if any profit. Such an acute problem can only be solved on a state level.

BPA: under Brexit and COVID-19 pressure