It took 105 days to build the bridge 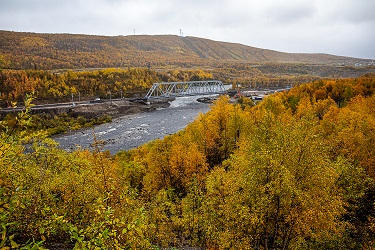 The new railway bridge over the Kolar river at the Kola-Vykhodnoy section in the Murmansk Region was opened for traffic on 28 September, says Corporate Communication Service of Oktyabrskaya Railway, a branch of Russian Railways OJSC.

According to Oleg Belozerov, it took 105 days to build the bridge.

Design and survey works for construction of the new bridge began immediately after the span of a railway bridge in the Murmansk Region collapsed on 1 June 2020.

Unlike the previous bridge, the new one has not support structures in the river channel. All of them are placed on the banks thus excluding the exposure to floodwater. Besides, this approach ensures a lower environmental footprint with no structures hindering fish migration.

The bridge has three spans. The central one is 111.2 meters long with the side ones of 18.2 meters. The total length of the bridge is 158.2 meters. It is equipped with an innovative monitoring system for online warning about possible defects of the structure. In case of any safety threats detected by sensors, it stops the trains approaching the bridge. This system is the first of a kind on railway bridges in Russia.

Temporary railway route was arranged in 18 days after the collapse. The first train was launched on June 19.